poems from the manuscript "The Delicate Stallions" 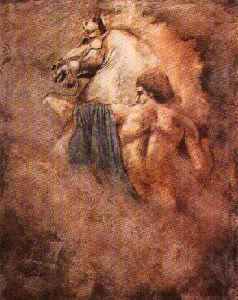 So now I am a Sir--
To every little him and luscious her;
And will be Sir until I take my passage
Out of this greengrowing symbion:
A man to be considered, but not long
(Sometimes no longer than it takes to smile).
Curious that I never think of it
Until it happens--
The space that opens up between our bodies
(The healthy young and me); between our minds.
That's the meaning of respect:
A space, a sign of impossible intersection.
This comes, simply, of having stayed alive
or not having lived hard enough.
You finally reach
That touching place where all's untouchable;
You finally come to wear,
Even beneath the monthly drugstore dyes,
The halo of gray hair that urges you
To be a saint--a saint without a prayer.
Or may one:
"Give us this day a kiss--keep your daily bread."
The bread arrives in truckloads, hour by hour:
The kiss remains
Trapped in the glittering heaven of a stranger's eyes.

Saba the tortoise escaped
Out of his box and under the bed.
He was never seen again
By anyone: the perfect disappearance.

We looked a long while
By my reckoning,
But then my father turned on the tv,
My mother took her piano lesson,
My sister had a date,
And Saba went out of their minds
Like a bad tune.

Thereafter he started his twin existence:
Wherever he really was, and in my thoughts.
Now after all these years
He is only a thought,
A thought scrambling across the floor
Making an entrance unexpectedly.

If only I could say to him: Saba,
The house is all different,
Your box was turned into kindling
A week after you left,
My parents retired and moved to Arizona,
My sister is married to a violinist,
I’ve stopped eating lettuce.
Go back now.

But Saba doesn’t hear. He knows
It’s easier to dismiss the body
Than dismiss a thought,
He has figured out the secret of being a thought.
So he keeps coming on, demanding quietly
That I rearrange things,
Demanding a new place
Under the old conditions.

Yesterday by a young oak I saw
A long green snake. Its small, delicate
Head raised up, it might have been
Tasting the air for molecules of Indians,
In the way of snakedom for generations
Past. No doubt I disappointed it,
A man wearing old tennis-shoes
And pulling a cart. It stayed
Motionless anyway, on the look-out
For treachery, the psychic domain
Of the snake. I walked around it,
Respectful, glad for once not
To have been born a chipmunk.
The snake stayed put--I could see it
Fifty yards away, not even
Turning its head until I was gone.

On either side, a moment of relief
Tinged the ozone air. And though
I came back often, I never saw
The snake again, or any sign of it--
Except, once, half a shed skin, that could
Have belonged to any snake, being colorless,
And brittle; and I wondered if
Our meeting wasn’t some mistake
Of the universe, or maybe a deliberate
Crossing--that somehow we had called
Out to each other, like old uneasy neighbors
Curious about our mutual doings yet dead
Against reconciling, or relations who had met
Here at this place, chosen beforehand
A thousand years ago, only to reaffirm
The kinship of enmity.

The moment comes when she opens her eyes
And looks into the street, and sees--surprised--
The world has not changed one iota
Since her last lifetime. One might expect at least
Some new twist in the delivery of mail,
Some new mode of transportation. But everything
Is what it was, and seeing it so, she becomes indifferent--
Goes out to bask herself and look up
Her old lovers; moves quickly, padding
Toward the door and out of it; and with one turn
She is back in her old haunts, refreshed
By what seems to have been sleep (but was
Surely a death). In any event, she has begun again:
Her old life is shed like fur (tufts of it
Hang in the bushes), her new life
Is to take again in quick sharp claws the springing
Mouse; to prowl, glad in her errant strength,
Byways leading to adventures
Reckless but not altogether uncomforting,
Not entirely unfamiliar.

So Rhonda the cat

Comes alive, senses a new direction
Through an old territory. She stretches herself
And feels the night fall away--fall away
Except for a dream in which she was something other
Than a cat--a woman, a goddess perhaps, who purred
Sweetness into a man’s ear; who turned
His flesh into her evening scratching post
And made him writhe--though curiously
Not with pain (though he called out) but with
A kind of pleasure, like the slow movement
Of climax. And that too was familiar.
She might have been there for real--
The arm and hand of the woman
Stretching out might well have been her paw,
Her foreleg. Then, too, she remembers thinking
That her cat-life was the dream, and she
Belonged with the man; that he sang her songs
She swore she would remember, but does not
Now. Then, even more miraculous,
She had speech. It played
On her tongue, coy at times and teasing,
And the man listened to her and laughed
At what she said, then gasped, and laughed again.

How strange--she had fought to stay there,
Yet awoke in spite of herself.
The man caught in his dead-to-the world sleep
Drifted away from her, and nestled in the woman’s arms
(Arms that she--the cat--had moved one second,
A little second, ago).

Even now, she seems to hear, just at the edge
Of hearing, their voices:

At the sight of a bird
That has winged its way onto a lawn and sits
There motionless--excitement of the prey in sight--
The man speaks her name, the woman
Replies for her, giving a low throaty laugh;

At the inviting feel of a sapling
Against which she rubs herself, going back and forth
With quick liquid steps, the sound of their movements
Reaches her, like the sound of ancient,
Invisible gods turning among the clouds:
(Remnants of a dream--she has known them before
Clinging to the day like fur tufts
On a briar.)

How easy it would be, she thinks,
To become the woman herself,
If she were so inclined; how ecstatic
To feel the touch of the man’s hand along her flanks.

But now the human world disappears
Into the heavens, and she is left to hunt and sleep
In peace--the one proud cat, licking her paws,
Cleaning herself for the next
Celestial encounter.

In his day he rode easily.
The children on the beach would run up to him
Oohing and aahing, and wanting to know his name,
And asking politely to pet him.

At a touch from me,
He would bow down to them and do a fancy turn
Along the line of the tide, holding his fine head up
Erect as a chessboard knight’s.

The lunge and flow of him
Drew them on, running after us, then stopping suddenly
When I made him rear, a little frightened but clapping:
Infants of a new-found equerry

Now he is half-blind--
Walks into barn-doors, gates; mistakes his stall.
He will no longer go dancing on sand and wave.
The children he knew have grown up.

Yet at times when the days
Turn fresh and the wind sweeps up from the seaside,
He seems to recall his pride, and nimbly canters and pivots,
Lively as a new-sprung colt.

His beauty has taken on
A strange solemnity, as if he were waiting to become
Something more than his master’s once-favorite mount,
More even than simply a horse

Gazing into the horizon.
He stands on the meadow hillsides, much like a man
Who has awakened and found himself turned into a horse,
Astonished at his new body.

Seeing him I too feel
The horse’s head poke up through my mind’s-eye.
Through him I see a newness in the world, sense the supreme
Equine gift of body and legs

Delicate and long.
I am lame as the three-legged man until I find him grazing.
Together we are like the centaur divided in half, trying
To complete itself, to reattach--

A determined doubling, alive
On the edge of suffering, not ready yet to give in,
Still made of dreams, still keeping apace with the dashing
Pairs, master and mount.

We are each other’s burden
And delight. We roll at leisure in the last soft grass;
The weathercock spins counterclockwise. The changes come
Like small but hurting stones.

We lean into the horizon
Making old promises, feeling the sun again, spectacular
And grave in its going, the salt of memory prodding us
To venture out once more:

We’ll go the beach again soon
To frisk and let the tides wash over our hooves
And watch the white-caps run, the little distant sails,
And talk to some children.