Song of the Snake-Skinned Shaman

by "The Dark" Nathair

[The following, as an illustration of the importance of Dionysian consciousness in shamanic work, is a kind of shamanic 'soul opera', a polytheistic blend of trance vision, oracle and dream, involving various voices, including my own, and several guides, including major deities Aaivan and Terragian, an Underworld Lady, Black Elk, animal guides Merryth, Shakasta (Humpback Whale) and Daynar, and principal celestial Goddess, Celendien. It also includes ventures into the Celestial Overworld, World, and the Underworld, and mentions my two deerskin drums, Ilistroi and Chelle-Verrain]

Dream Chorus: "Wielding the wooden Dream Staff, help the vast field of children safely cross one by one, from left to right across the path strewn with sharply broken stones. Holding the Staff, cut from the Axial Tree aloft, feel it burst ablaze with red and white flames. Face the hovering aisle of the Seven Guardians who ask in chant-song:

What is the Question that must be asked? 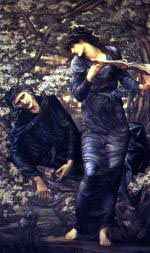 What is the Limit that can't be passed?
(The Seventh Question is not asked or answered in words)
The Guardians point and the staff flames burst into red and white rose
petals which rain out over the crowd.

Black Elk speaks: "Chelle-Verrain, sister Drum of the Moonlit Waterfall, empower upward through the left-hand spiral. Ilistroi, brother drum of the Western Sunset, gather strength from the Four Directions and follow the right-hand healing path of the sacred Serpent, Prana-Nathair."

The Dark Nathair: "I am the alchemical Uniped, upwardly a separate King and Queen, fused in that part of me that hops, cavorts, and limps throughout the World. I am winged as was Icarus, yet never falling as I prance among the stars and tunnel through the dark maternal depths of Sea. For the chasm was opened and I fell into its endless depth, and in falling found freedom and courage to ascend the Pillar of Fire into the Void."

Celendien, Central Overworld Goddess: "Descend in the down-flowing Pillar of light, slow-flowing Water, sister to the upward Pillar of fire-light at her left and the clear space-time Gateway of Air to her right; in Unio Mystica, wield the Threefold Seynlight of Andemar."

Terragian, Trickster God & Sacred Fool: "Let Mercurius take central stage (by hiding); let both facets mirror shadow in their depths, and draw you into even deeper seeing. Blessings on your journey from the peaks and the vale; blessings in decay and resurrection. Blessings in the soft worn shoe, in the steady drum-beat, and in the tympanic hat that resonates with solar radiation."

"The Dark" Nathair: "I am the lone Wolf who follows my own drum-beat and has no rules, save the law of my errant pulse of life and inner song. I have trod the searing rocks of Venus and the violet sands of a world beyond the realm of Sol where auroran skies flared verdant with delirious radiation. Absent-minded, having through ek-stasis left the confines of Earth, I am present to a multiverse of Otherworlds."

Aaivan, Child Eternal: "The snake-skinned one must die in order to live. Where there is no choice, there is no uncertainty. You must dance where the Red Shoes take you, even if it be alone through thorns and frosty rain, to be cursed and envied by the masses who shelter in the temples of belief."

"The Dark" Nathair: "I am at the Centre, as is everywhere else. To be centred is to be self-circling on one's own teetering axis, to turn and twist in the uroboric dance at the pace of one's own heart, harming none, hindering none, connected to all yet a Cosmos and a law to oneself, feeling, as did the Soul-making poet, the giant agony of the world, adding the ocean drop of one's own compassion to help retrieve her sacred soul. Neither seeking nor needing the respect of others, I am driven by delightful demons, howling beasts, cavorting leviathans, elemental passions and fiery angels that have danced me down a razor-thin path, the perilous Rainbow Bridge of the Fool that arcs across chasms and is surrounded by the flutter and twitter of Otherworldly birds. As the Fool I have travelled lightly, sometimes with empty pockets but always with a soul brim full of the agony and ecstasy of life and death entwined."

Ainjanneth, Dark Lady of the Underworld:
Once for the wounding that brings healing
Second for the darkness that leads to light
Third for the death that gives birth to life

Dream Chorus: "As the day dies to embers, the clouds hover like slashes of wild red wings, and the sun bleeds gold into the sea. At the top of a lonely cliff, white Eagle Merryth looks over the rippling sea upon a sun-dancing swarm of exquisite gold. She tastes the sea-breeze ruffling her feathers. On her left leg she wears a band of gold on which is engraved a swimming circle of ancient Druidic salmon. Across her eyes, like miniature summer skies, white clouds then storm clouds drift. Seeing through piercing, soul-deep gazing, she medicines a lack of focus and clear vision, and destroys all fear of letting go. She is the courage to be alone and to bring shadow into light; she protects the wounded souls who have wandered in sleep to disturbing realms. She calls forth a mingled challenge and celebration of the skies, sees far to the horizon where humpback Shakasta, her giant Sea sister, is puffing up spray on her way to the South. She hungers for fish and yearns for Sun to glare through the clouds so that she can meet Him eye to eye. She leaps forth, borne aloft on cushioning currents of air, along the shore sifting and drifting, seeking among seaweed for strange gifts from the sea. She shoots up in an arc toward a bank of grey cloud through which Sun's rays are shooting down with intangible swords of light. Time dissolves in timelessness. We are Merryth. We are one."

Ainjanneth, Dark Lady of the Underworld:
Fire defend you
Earth sustain you
Water cleanse you
Air inspire you

"The Dark" Nathair: "In realms of World, I am Moon's cool reflection till the solar arcs of great Sun in Dreams enfold me like a shielding arm. I am a leaping flare of Sun as my cavorting dolphin helpers are the arched tendrils of their Mother sea. I have known the distillation into order of my riotous pain, the celebration of my rite of passion through intitiation to freedom from attachment and desire. In the heart of the fire, I rest content yet ever restless, my eyes aglitter in the dark forest of the soul, waiting, watching, eager for the ambush of the known unknown. Ilistroi, Warrior Drum, beats with solar-hearted rhythm as Sun drips crimson into the sea; linked to his old red Father Star, Sun calls me deep within the Centre again. There the stars are dazzling and burn with an excess of life. In the Centre stellar spheres condense into an agile yet tranquil sea of light. Their whirling circles fuse, overlap and edge out every shred of darkness. But their light is blinding as dark disguised. From the Centre stream forth braided paths of Fire, Air and Sea. Meeting the outer Worlds, they fade in on far horizons as the Three Pillars of axial ascending and descending.

The Central song beats gently through Chelle-Verrain, drum of the Moonlit Waterfall, not in words, nor in voice, but as the vibrating hum of a slither of fine crystal, high and icy, disturbing yet reassuring, a music far and unreachable, heard within inner realms of sound and as piercing as great joy or pain. In a resonance of harmony, clear and tingling shine other stars; the youthful intensity of the blue-white spheres, the brilliant white stars, the autumnal yellow of the mature suns, the ruddy gleam of ageing orange stars, warm with ripeness and wise with age, and the great dying embers of the ancient Red Giants. The song draws to itself all shades and echoes, all sounds and sights of celestial night, sending them forth again heightened in clarity so that all light becomes dazzling and all darkness velvet with life."

I am the first and the last,
the beginning and the end,
that which is and is to come.
And I am the End of Desire,
the beginning of wisdom.
I am the sky beneath the earth
and the sea beyond the heavens.
I lose, therein I have,
I move within my stillness.
For I am the fourfold Union,
earth, air, fire, water,
birth, death, dreaming, and the Void

Chorus: "Up from the realm of World by Seven Stairs climb from colour to colour, rhythm to rhythm, low tone to high, ascending by drum the axial Pillar of Fire, up beyond the thin air and midnight cloud to tall cathedrals and Celendien's summit halls of marble white beneath frozen swarms of a myriad stars. Filigreed with ice, on Aaivan's adjacent Moon a north-bound stream winds hazily to dawn.

Aaivan, crossing lone plains of snow, opens his hand and the Rainbow Bridge of illumination is revealed. In his tiny palm he holds the secrets of both stones and stars and counsels them from an airless world of transparent cliffs and iridescent seas. A Silver Globe darts to and fro before him in seeming mischief and delight, tracing out hovering pathways, exuberant yet warily deliberate in all its moves. And it is as if He dwells on the ageless floor of a measureless depth of Sea, a light to himself, while in the cool heights above the surge and swirl of life goes on unknowing of that deeper Mysterium."

Aaivan, Child Eternal: Vision of Discernment of the Heart

I am Discernment of the Way,
knowledge that doth ebb and flow
and journey like the wind.
Trust me: though your heart grow weary
let it have its way with thee,
listen not to voices that will clamour for its safety.
I will set a Point for thee upon a distant shore,
many storms will bar you from it, seas uncrossed before,
but from your sight it ne'er shall vanish
and the light there ne'er shall wane,
see the Point, for naught else matters -
all that's lost for it is gain . . . .

"The Dark" Nathair: "The storm-raged weight of Ocean is falling; a baptism, a blanket, a breaking asunder, a Sea-change in the backward abysms of time. Those are pearls that were my eyes. The giant Sea falls hissing onto Underworldly rock and flame, where mighty dragons rage to and fro breathing quintessential sulphur. Bodiless voices float in hissing waves from heat-miraged, gem-fruited tree to tree, and the boom and shudder of a distant anvil focuses through flame into Ilistroi, my brother Drum. My blood pulses with the surge of the overhead Sea; the heated Earth is the living extension of my feet"

I am the Flame Imperishable,
the purging of the Way,
the purifier from the dross
of shadow and decay.
Trust me: I shall burn you brightly, 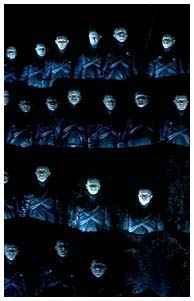 fast consume what fears the fire,
all that cannot last will perish,
leaving the pure heart's desire.
Let my searing light engulf you,
shield your eyes from me, draw near,
I will blind you into seeing,
transform the opaque to clear.
Let the Dragon breathe the burning,
forming unspelt words of flame,
let its breath be drawn from places
you alone can name.
I am the Flame Imperishable,
the forging of the Way
to the Centre through the doors
of shadow and decay. . . .

Flame to flame, flame to water,

water to air, air to stars, stars to earth,

Earth to Centre, Above to Below,

In Unio Mystica, Circle without end 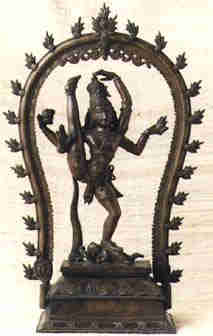