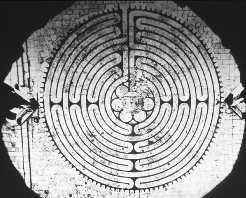 by Maureen B. Roberts, PhD ["The Dark" Nathair]

As ancient Chinese Taoist philosophy teaches, and as the great
soul-centred psychiatrist Carl Jung understood, there is a dance of
opposites, a polarity inherent in Nature and in soul as part of
Nature and as the inner mirror of Nature's eternal law of being.
Both inwardly and outwardly, life's conflicting opposites strive to
balance one another and coexist in harmony, since one-sidedness
of any kind can lead to illness, psychosis, neurosis, depression,
stagnation, or loss of energy flow.

The union of opposites is not a rational process, nor one that can
be brought about by force or will, but is rather a natural, unending
process of development which spontaneously expresses itself in
symbols. The best known of these symbols is the mandala, which
is a Sanskrit word for 'magic circle'.

Mandalas, which are universally occurring symbols of cosmic and
spiritual wholeness, image this striving to reconcile opposites
and harmonize life in terms of a centred totality, a divine core of
both Cosmos and soul, in which the opposing forces at the
circumference are reconciled within a still centre.  Throughout
both Eastern and Western cultures, mandalas occur in artwork,
dances, Tibetan Buddhist sculptures, and in the healing sand
paintings of Pueblo and Navajo Indians. Mandalas, like
snowflakes occur in countless forms, some of the most common
being the flower, cross, star, flames, or wheel, usually with a
tendency toward a fourfold structure.

This fourfold unity mirrors the natural division of the World
into four seasons, four directions, and four elements, and as well
it images the fourfold structure of the psyche, which is the Greek
word for 'soul'. The four elements in the psyche, for instance,
correspond to what Jung called the 'four functions', conscious
attitudes through which we relate to both inner and outer life.
These can be drawn onto a mandala diagram in terms of two axes,
or pairs of opposites: on one axis, rational thinking opposite
feeling, or our sense of personal values, likes and dislikes; and on
the other axis, sensation, that is, our practical awareness of facts
and objects, opposed by intuition, an indefinable sixth sense
which operates by way of direct insight, perceived meaning,
hunches, and a wholistic awareness of where a process of
development is coming from and where it is leading.

The mandala expresses the intuition of the divinity incarnate in
humanity and as a diagram of the spiritual life it is used,
particularly in Tibetan Buddhism, as an aid to meditation. In
Buddhism, the true mandala is an inner image, constructed
through intense concentration, discipline and meditation.

Through attaining a centred consciousness, or a state of calm
being removed from the warring forces at the rim, we can retain a
simplicity of mind and a tranquil heart beyond conflict, a flow of
contentment which depends on becoming detached, or equally
removed from both pain and joy, loss and gain, life and death,
light and darkness. In Buddhism, this state of inner peace and
blessedness is described as the 'centre in the midst of conditions';
in Chinese Taoist thought it is called the 'yellow middle'; in
Hindu thought it is 'nirvandva'; freedom from the war of opposites.

In Lamism and Tantric yoga, the mandala is the birthplace of the
gods, the opposing peaceful and wrathful deities, which the
Buddhist becomes through meditation and manifests in order to
pacify evil influences, through embodying compassion for the
World. The shaman's drum has the same mandala structure and
can be viewed as a cross-section of the mythic World Tree, which
runs through the centre of the shamanic Cosmos and unites the
celestial Overworld with its opposite, the fiery depths of Underworld.

In Jungian psychology the centring of consciousness symbolically
in the heart of the mandala is called 'individuation', that is
'un-dividedness', the integration of the personality which comes
through the conscious realization of our full potential, or
personal wholeness. This takes place when the divine core of the
personality becomes the centre of a more wholesome field of
consciousness and experience, which is able to embody, give
voice to and celebrate all of life's opposites. Jung calls this true
centre of gravity of the personality the Self, and as a spiritual
experience and mandala image, it is indistinguishable from what
we call 'God'. In other words, to know our true inner Self, is to
know God, hence to know the divine incarnate in humanity.
This is an intuition which was expressed by the medieval notion
of God as a circle, whose 'centre is everywhere and whose
circumference is nowhere.'

Individuation, or becoming whole, is a task which is never fully
achieved but which, like the proverbial carrot before the donkey,
lures us ever onward toward the elusive horizon of personal
wholeness.  We never arrive, in other words, but we can change
our consciousness so that the journey becomes more meaningful,
more fluid and in harmony with Nature.

How, then, can we create, use and work with mandalas as a guide
and aid to our own psychospiritual growth and health? Anyone
can draw or paint the mandala pattern of his or her own life. If
you prefer, to begin with use a diagram of a centred circle, or
square. You might like to create a meditative atmosphere with
the use of candles, and perhaps some incense and restful
background music. Then just draw or paint spontaneously, using
whatever creative input you like, words, geometric images, or
figures drawn from Nature, dreams, myths, fairy tales, religious
imagery, and, importantly, from your own imagination. You
may, for example, want to reflect on how you respond to life
situations in terms of the 'four functions'. Which of these
functions comes most naturally to you, and which is the one you
have most problems with and therefore need to further develop?

Draw your emotions into the image through the use of colour.
Red, for example, is a passionate, energetic, warm colour
expressing raw emotion and life's instinctual drives; blue is a
calmer, cooler colour, often more to do with thought, verbal and
musical expresssion, or reflection. Green, which is in the middle
of the visible spectrum, is also the chakra colour of the symbolic
core, or mandala centre of our body, the heart, and so expresses
balanced emotions, which are both warm and coolly detached. At
the level of the heart also occurs, in both men and women, the
spiritual union, or sacred marriage of masculine and feminine,
out of which is born the inner Child, our reborn divine self.

Some parts of your mandala will be consciously devised and
others will arise spontaneously from your unconscious. The
mandala will thus be an expression of the union of the basic
opposites of conscious and unconscious, which is central to the
process of individuation. You might also consider working on a
series of mandalas over several weeks, or months, and then
observe and reflect on the processes of development, conflict
resolution and transformation that unfold over time.

Don't try to logically work out what the images mean. Instead,
use the finished mandala as a focus for contemplation, perhaps
about imbalances, illness, unresolved issues, relationships, hopes
and dreams, or conflicts in your life. Detach yourself from all of
these by emptying your heart and mind of fear, desire and worry;
breathe them all out and let them flow away as you centre your
consciousness in the mandala's centre. Here, in this Still Point,
you are your true self, detached from the conflict and at one with
the divine heart of the Cosmos.

This detachment and self-emptying at the centre doesn't mean
that we cease to feel pain, emotion, shock, or concern. We are,
after all, human. What is does mean is that we cease to identify
with our suffering, in the sense that the untouchable, divine core
of our being is able to detach, stand back, and ask not 'Why is this
happening to me', but rather, 'What does this mean? What am I
to learn from this experience, however painful?' In this way, we
learn to outgrow conflict by moving out from a narrowly
personal sphere into a higher and wider perspective, in which we
experience our own centre as simultaneously the divine heart of
the collective unconscious of the world.

The conflict, in other words, is not solved logically; rather it fades
out when faced with a new and stronger life tendency. What, on a
lower level, may leads to stress, panic, sickness, or emotional
outburst, viewed from a higher, or more calmly centred level of
the personality, seems like a storm in the valley seen from a high
mountain top. This doesn't mean that the storm is robbed of its
reality, but instead of being in it, one is above it, or detached from
its swirling circumference, just as the heart of the raging tornado
remains peaceful. We certainly still feel the emotion and can be
shaken and tormented by it, yet at the same time we can be aware
of an untouchable still centre, which stops us from being identical
with the emotion, and which looks at it in a detached way which
can say, "I know that I suffer, yet I am not that suffering." By
being calmly centred and at one with the divine, we thus learn
how to suffer and not suffer at the same time.

The mandala can also be an image of eternity cycling through
time and as such images soul's and Nature's circular journeys, as
they are reflected in, for example, the Native American Medicine
Wheel, in seasonal, rebirth and karmic cycles, in mythic journeys
of going out and returning changed to one's point of origin, and
in the zodiacal wheel as life's twelve archetypal stages of personal
growth.

This cyclic transformation is also at the heart of ancient Chinese
meditation. When the spiritual light in the body moves through
rhythmical breathing in a circle, all the opposite energies of
heaven and earth, sun and moon, light and dark, are crystallised
and form what the Chinese called the Golden Flower, an inner
mandala imaging the balanced, open and centred heart.

The ancient Chinese had such an all-embracing consciouness,
because life's opposites were all given equal value. This
self-balancing, always shifting dance of wholeness, is imaged in
the basic Taoist mandala, which pictures the intertwining union
of Nature's basic opposites of yin, the dark, receptive earth
principle, and yang, the active, creative, heavenly energy. When
we consciously live in harmony with this 'eternal way' of life,
which reflects the true essence of personality, we experience a
tranquil sense of cyclic flow, an awareness of following a
goal-directed journey toward the elusive treasure of our
innermost Self.

Obstacles and confusion are thus signs of a need to pause, to go
within and listen to one's heart, one's centre, before taking
action. Similarly, loss - whether of possessions, or through death,
sickness, or an ended relationship - is  an opportunity for growth
and healing which arises when the pain and darkness fade and it
dawns in us that our strength and contentment lie in our ability
to meet adversity with a tranquil mind and an open heart.

Above all, then, listen to and follow your heart as it beats like the
shaman's mandalic drum, expanding and contracting to the
endless rhythm of life. Keep pace with your own inner drummer,
not with anyone else's. As you do so, may the unique mandala of
your life unfold like a flower, be pollinated with simplicity and
wisdom, and bear as fruit the compassion of unconditional love,
which loves itself as much as others, which is freely offered, and
which knows no bounds.